Why Should Companies Support Drupal?

I’ve been involved with open source software (mainly Drupal) for the last 10+ years. There has been unquestionable growth when it comes to Drupal adoption. I’ll spare you the war stories, but the decision paradigm has shifted from executives asking, “why should we consider Drupal?” to “why would we want to look at a proprietary, licensed based option and pay seven-figures in just licensing fees alone for ‘closed-code’?”

The global brands and blue-chip organizations adopting a more open source based web strategy within their organization offer convincing validation that content management frameworks like Drupal are continuing to gain market share and momentum. The following is a random, cross-section of organizations that have adopted Drupal in some capacity in a variety of different verticals:

In short, those are some impressive organizations entrusting their digital and web strategy to Drupal in some manner. Yet, there continues to be confusion amongst adopters around “why” supporting an open source project like Drupal is important. Essentially, the amount of organizations who contribute and support the Drupal project are professional service companies. There is overwhelming quantifiable evidence that supports this.

According to 2016 research conducted by the founder of Drupal, the vast majority of the contributing organizations (Mediacurrent among them) are professional service companies. 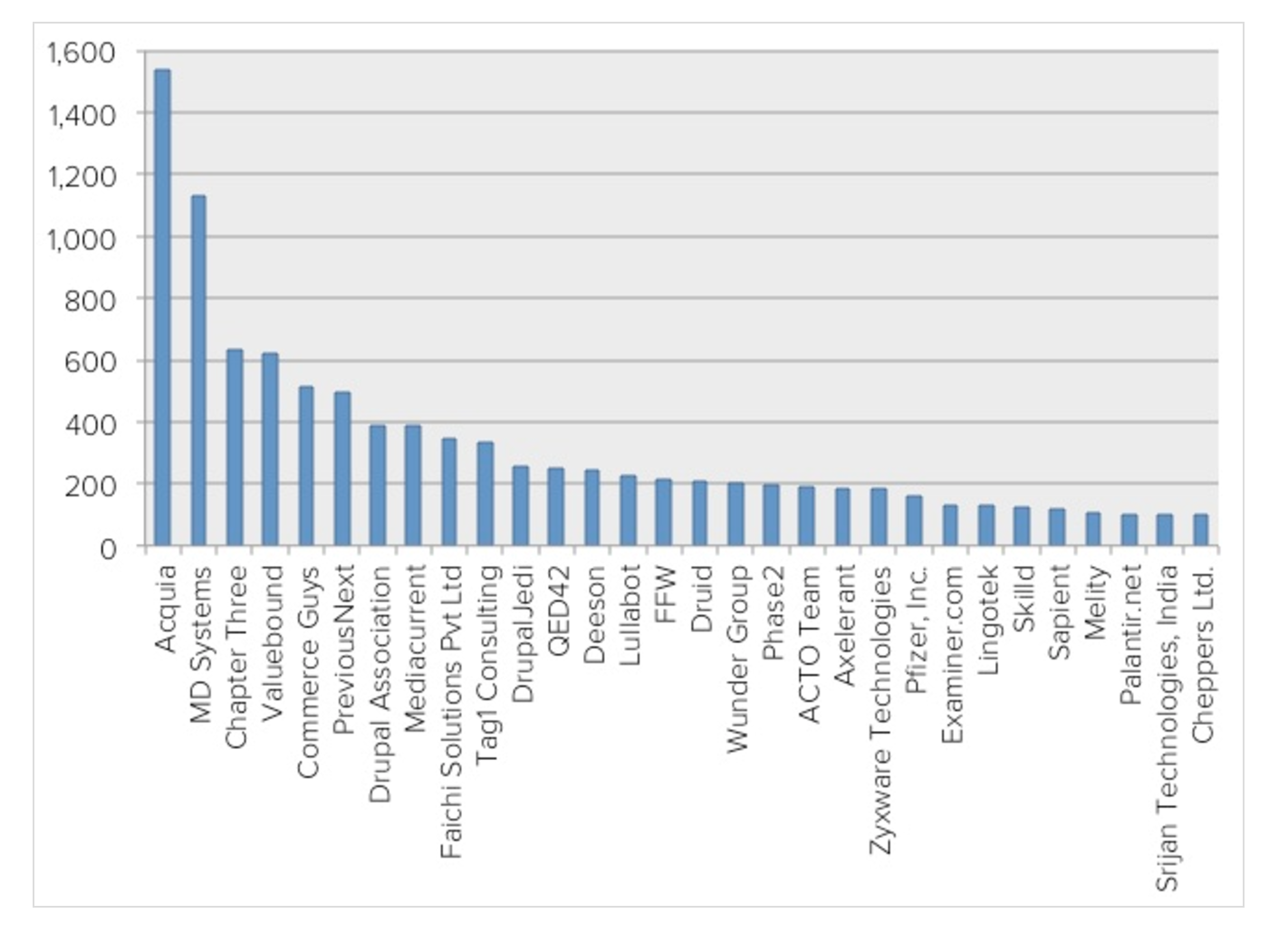 The breakdown is as follows:

Even more eye-opening is that of the approximately 100 sponsors for Drupalcon Baltimore, none were actual adopters/end-users/companies (this assumes the agency or professional services side of Accenture and E&Y sponsored). What’s interesting is the void amongst higher ed institutions. The participation statistics suggest they are often one of the verticals with the highest percentage of attendees, yet there seems to be a huge challenge within those organizations to sponsor a Drupal event.

For most organizations, becoming best-of-class in “digital” is part of their strategic vision in some capacity. The data clearly supports this assertion. Last year, IDC conducted a poll of Global 2000 companies and found that by the end of 2017, two-thirds of CEOs will make digital transformation the #1 priority within their company.

If this is true, then what is causing the reluctance among those who adopt Drupal to get more involved, since Drupal adoption aligns so well with their overall vision?  I would theorize that the primary reason is a simple lack of awareness and recognition. There is not enough knowledge of a correlation around the benefits and value an organization will receive to their bottom line if they were to subsidize an open source project like Drupal. The core problem to solve is educating organizations around how their involvement in Drupal aligns with their already existing mission, vision, and values.

The following are some of the immense benefits organizations can receive by contributing back to Drupal.

1.  Purpose: people will get fulfillment out of knowing their work and code is helping support a company’s mission, especially if that mission aligns with their own. This is particularly true of non-profits or higher education institutions, which are two sectors that have seen tremendous Drupal growth.

3.  Free training for your employees: other developers will do code reviews and quality control and test the modules you are using for bugs.

5.  Technology awareness: most companies inevitably rely on a key subset of modules or functionality that are imperative to their use case (i.e. media companies may need contributory modules associated to video to be ported to the latest version of Drupal). By allowing your team to work “on Drupal” the wider community is able to recognize and appreciate this.

Next, I do want to point out that there are certainly outliers and by no means do I want to imply that every company is not supporting Drupal. Of course, the mere adoption of Drupal creates jobs and helps the ecosystem in a variety of ways. In preparation for a 2016 presentation, I had the pleasure of talking to Mike Lamb from Pfizer. The organization model he is building is inspirational as he describes at Drupalcon Dublin. Companies like Time, Inc. are donating much-needed funding to support Drupal’s infrastructure.  Organizations like NBC are sponsoring venues for Drupal meet-ups and conferences in New York City, like the recent Decoupled Developer Days.

This is not just happening in Drupal. Companies are realizing the huge value of crowdsourcing like code sprints, hack-a-thons, and open-sourcing their code. United Airlines runs bounty programs and gives away millions of skymiles for “friendly hackers” to identify security breaches or bugs in a controlled environment.

Finally, gaining more traction from adopters of Drupal will be critical to continuing to scale the community beyond where it is now. In my opinion, getting these end-users engaged should be one of the highest priorities within the Drupal Association.  There is a huge opportunity for executives within organizations to create a culture of giving back. This could be in the form of simply approving a case study (i.e. sharing knowledge), sponsoring a camp, approving a patch or contributory module, or allowing your in-house team formal time to work on Drupal.

I’d love to hear your thoughts on this topic.  What are your views on why companies should support Drupal?  What other examples would you like to share?