How to Survive Drupal 7 and 8 End of Life

All software, even that of Drupal’s top world ranking open source community, comes with a shelf life.

Drupal 7 is now a decade old, with the advent of Drupal 8 falling just four years behind. These previous major Drupal versions weren’t left in the dust with the release of Drupal 9 in the summer of 2020. But that support has an expiration date coming soon. Both versions 7 and 8 have set “End of Life” dates which means they will no longer be supported by the official Drupal community.

Version 9: Drupal in its Prime

Organizations are moving to Drupal 9 to reap the benefits of fresh features and community-supported innovation. The pace of adoption is faster than ever. It took one month to go from 0 to 60,000 sites on Drupal 9 compared to taking 7 months to get 60,000 sites on Drupal 7. Although good progress is being made with organizations moving to Drupal 9, there are still thousands of Drupal 7 and 8 sites live. If you have a Drupal 7 or 8 site, you need to start planning immediately to ensure you are prepared for support ending. 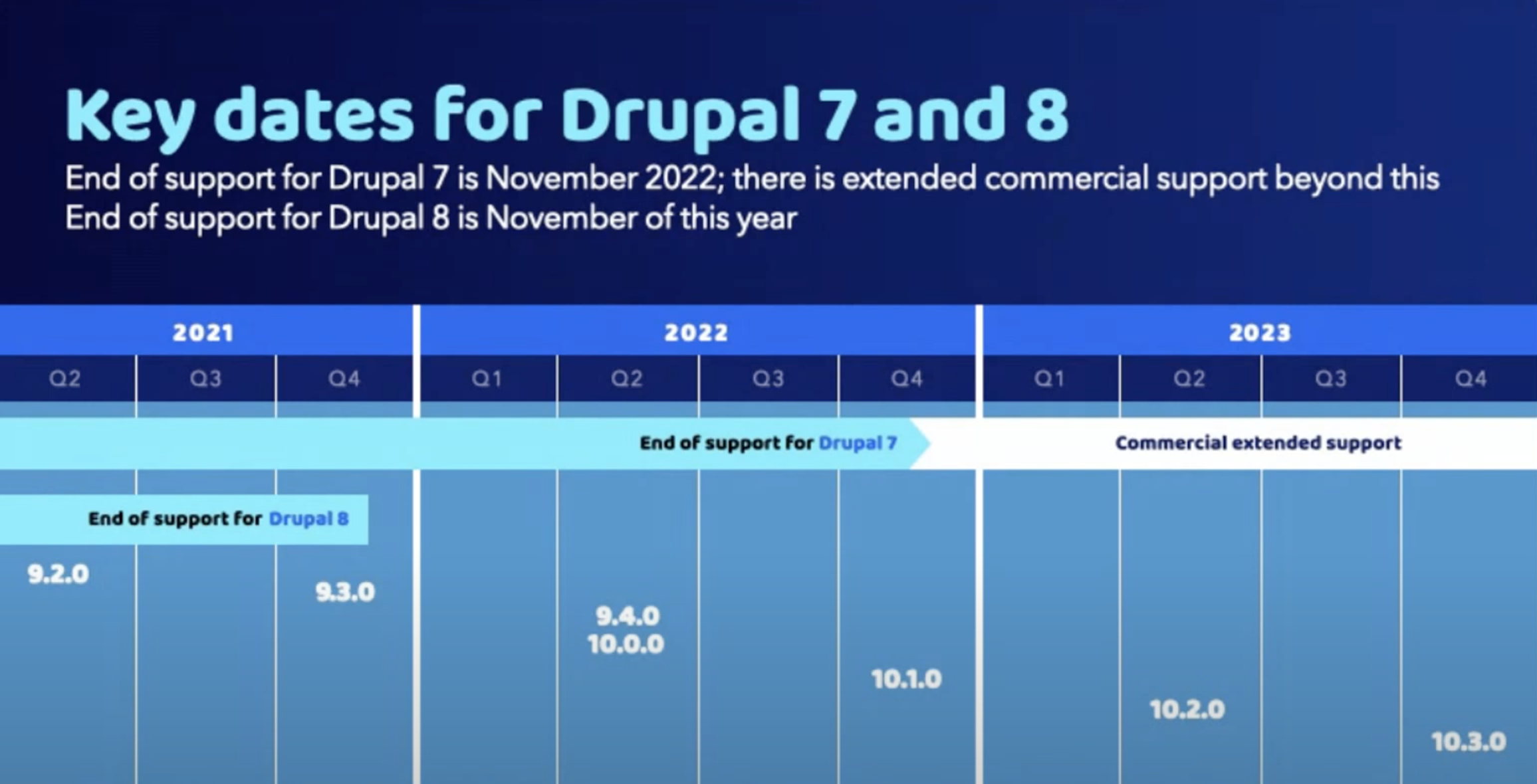 It might come as a surprise (and seem a little odd) that Drupal 8’s End of Life occurs before Drupal 7’s. There are a couple reasons behind this. First, the transition from Drupal 8 to Drupal 9 is not a significant effort in most cases. Drupal 9 is not a reinvention of Drupal, with only two key differences; updated dependencies and deprecating APIs. The Drupal Association illustrates the transition from Drupal 8 to 9 as just a station on the same track (versus moving the train to a different track entirely for previous upgrades). The other reason is Drupal 8 is dependent on Symfony 3 and Symfony 3’s end of life is November 2021.

Source: Understanding How Drupal 9 Was Made, Drupal.org

For Drupal 7, the original end of life was set for November 2021 but due to the impact COVID-19 had on many organizations who are still on Drupal 7, no dependencies on Symfony 3, and the effort needed to upgrade from Drupal 7 to Drupal 9 (requiring a migration and site rebuild), the date was pushed out a year.

How does this impact you?

Drupal is an Open Source project with a uniquely robust security model:

When Drupal 7 and 8 support ends, there will be no more Drupal core updates to Drupal 7 and 8 - even for critical security issues. The contributed modules that power your site will also no longer be actively tested and reviewed, patches and security evaluation will depend on your internal resources.

A recent study indicates that nearly 12 million websites are currently hacked or infected. Ensuring you correctly handle the security implications of Drupal 7 and 8’s End of Life is essential.

What do YOU need to do?

Without taking active steps to protect your website, you are going to be vulnerable to a security breach. Drupal 7 and 8 are widely-used content management systems that have served as a platform for some of the world’s largest websites. It is public knowledge that support for it will be ending. It’s likely that hacking groups are waiting for official support to end to use security exploits that they have already discovered to increase the number of systems they can access before they're patched.

Mitigating this risk is much easier with an experienced partner. We advise our clients to take the following steps:

Learn to love the upgrade

While Drupal 7 and 8 End of Life might mean more work for you, we view it as an opportunity. The way we consume information on the web has changed drastically since Drupal 7 and 8 launched, and if you are still on these versions and not planning on innovating, you are likely putting yourself at a serious competitive disadvantage.

In the longer term, sticking with Drupal 7 or 8 not only means you will be fighting a constant battle against security vulnerabilities, but also that you will be doing so with a dwindling number of allies. As time goes on, Drupal 7 and 8 sites will disappear. Fewer agencies will offer any sort of Drupal support for these versions. The talent pool of developers will dry up - anyone who learns Drupal today will be learning on newer releases.

Upgrading from Drupal 7 or 8 to Drupal 9 is the opportunity to revolutionize the way you think about the web as a business tool. If you have a Drupal 7 or 8 site, you have almost certainly had it for at least five years. How many little usability improvements have you considered in that time? Is your design dated? Does your site build reflect modern practices in SEO (Search Engine Optimization), accessibility, and user experience?

With Drupal 9, Upgrading is about more than just security

Out of the box, Drupal 9 offers a significantly more powerful feature set that allows you to build the modern digital experiences you need to compete on today’s web.

At this time, no new features are being added to Drupal 7 or 8. All the innovation is happening in Drupal 9!

All the best of Drupal 8 - Drupal 8 came with many new features such as an improved authoring experience with Layout Builder, an API-first architecture that opens the door to a decoupled CMS, TWIG templating engine for improved design capabilities, and built-in web integrations to name a few. All of these features are carried over to Drupal 9.

Intuitive tools - Improving Drupal’s ease-of-use remains a top priority. Easy out of the box, a new front-end theme, and automatic updates are among the strategic initiatives for Drupal core.

Future upgrades - Upgrades will be seamless for future releases. You will no longer be forced to replatform as new versions are released.

Stay on the edge of innovation - Adopting Drupal 9 will give you access to the latest new feature releases, happening twice a year.

Powerful Distributions - If you’re planning a Drupal 9 project, you don’t have to start with a blank slate. Drupal distributions like Rain CMS can be used as the “starter” for your next Drupal project.

Prepare for an upgrade with a Drupal 9 Audit

Upgrading can certainly come with challenges. As you start planning for an upgrade, a good starting point is performing a readiness audit. An audit assesses the level of effort and provides recommendations for a smooth migration path to Drupal 9.

For more information on our Drupal 9 Readiness Audit, or to start the discussion about transitioning to Drupal 9, please visit our contact page or chat with us right now (see bottom right corner of the page). We would be happy to talk more about your project.