Each month, we spotlight one of our amazing team members who work hard to bring you great results. Today, we interviewed Lanny Heidbreder from our Development team. Let's get started! 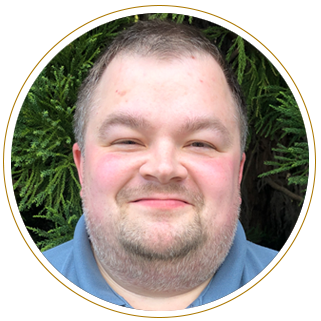 1. What’s your role at Mediacurrent, both internally and client-related?

I’m a Senior Developer focused on front-end work. At the moment I’m wrapping up the new NAMC site and getting ready for a new phase on our WordPress client ASSET InterTech. I also help maintain PWC OFRO, and internally I’ve gained a reputation as the tools-and-tips guy for my occasional staff meeting segments about getting the most out of our work-provided Macs.

2. Give us an idea of what professional path brought you here.

My college degree is in music education, but my plans to be a band director were a horrible mistake. After college, I worked retail for a year before getting a job at a small agency in Jonesboro, Arkansas. From there I briefly freelanced before joining another agency there, then worked at two Little Rock agencies, and finally landed at Mediacurrent.

3. How did you first get involved with Drupal?

My drupal.org account dates to the days of Drupal 4.5, but I only did sporadic dabbling as a hobby until about 2010 or so. My real start was with Drupal 6 site building at my first agency job, which grew into full front- and back-end Drupal 7 development later on.

4. Is there a go-to Drupal module that you like to incorporate whenever possible?

I stanned Paragraphs before it was cool. My knowledge of handy lesser-known modules has sharply declined with Drupal 8 and 9, though.

5. Do you have any recommended reading or books that you would suggest to others?

I think this question is about technical writing, not reading for enjoyment, and it’s been a while since I picked up a standalone technical book. One timeless classic I recommend is the O’Reilly Mastering Regular Expressions book. It’s old enough to probably be missing some important developments over the past decade and a half, but regular expressions haven’t changed so much that it won’t give you a huge leaping start on learning them.

6. Any mobile apps that you use regularly?

7. What do you like to do in your spare time?

Video games, he confessed ashamedly. Nintendo mostly, though I recently built my first gaming PC in over a decade, so I’m catching up on my Steam backlog. Top five games: Riven, Zelda: Breath of the Wild, Outer Wilds, Chrono Trigger, Super Mario Galaxy 2.

Well, the technology allowance has bought me a new chair, monitor, desk, and Synology file server over the past two years, on top of the MacBook Pro everyone starts with. But generally, making good money while sitting at home in pajama pants working on websites for 40 hours a week is a pretty big privilege, and the positive, collaborative atmosphere that is almost completely pervasive amongst the team makes it even easier.