If you are deciding between a standard Drupal architecture vs. a decoupled one with a GatsbyJS front end (which I’ll call “Gatsby” from here on out), certainly the latter approach offers some compelling advantages. Decoupling Drupal may be easier than you think. A Gatsby front end offers a more flexible and compelling user experience across multiple channels, as well as excellent performance, security, and scalability.

However, in developing an independent front end and back end, one must factor in the additional costs and financial benefits of doing so vs a traditional standalone approach. As described in our introductory blog post, Building a Business Case, a business case exercise can clarify costs and benefits, both in terms of initial cost, ongoing costs, and revenues of each.

In this blog post we’ll perform this exercise for standalone vs. decoupled Drupal with Gatsby, performing the following steps:

Determine the Costs of Each Option

Two different types of costs need to be considered when evaluating options, the cost of the initial implementation, and the ongoing and operating costs once the implementation is complete. The following two tables approximate these costs. Note: these costs are highly theoretical approximations, only to be used as an illustration. Actual costs can only be calculated once detailed requirements are considered.

A few things stand out in this comparison:

After implementation, each option incurs recurring costs. This is a critical consideration in evaluating options that often gets overlooked, and we recommend you always factor in these costs in your decision. For our example, the following table summarizes those costs (again, they are theoretical):

As with the initial cost, the ongoing costs of the decoupled option are higher, albeit by less. In our example, they’re almost equal. While hosting costs are again higher for the decoupled option, maintenance and support costs are less. Although there are initial bumps in the road for a decoupled solution, our experience has also taught us that once those obstacles are overcome, it is a lower effort to maintain the solution because Gatsby, and the React framework it’s built upon, are simpler than that of Drupal’s front end engine. It is easier to learn, and developers skilled in it are easier to find.

Determine the Benefits of Each Option

For investment in any of these options, a benefit is expected, particularly in expenses saved or new revenue earned. Focusing on annual revenue, the following table summarizes the theoretical benefits of each option based on an assumption that the standalone Drupal solution would generate $1000 a day in revenue, or $365K per year:

In this example, and in many real-world circumstances, a decoupled option slightly improves a site’s revenue, all other things being equal. This is because, in addition to having a more powerful and flexible user interface, a decoupled solution is more performant for the end-user. Further, a Gatsby front end typically runs as a static site on a CDN, with little to no database fetching occurring during a page load. According to sources like DomainRacer and MachMetrics, companies like Myntra, Amazon, Yahoo, Flipkart, and Mozilla experienced a boost in business by increasing the page load speed of the website with less than 2 seconds. Estimated revenue decreases conversions by 7% with a one-second delay, and a whopping 17% with a five-second delay. Further, page load time affects SEO rankings in Google, and slower websites have higher bounce rates. All of this impacts an organization’s reputation and customer loyalty.

When we combine costs with benefits as described above, we are left with the following comparison: 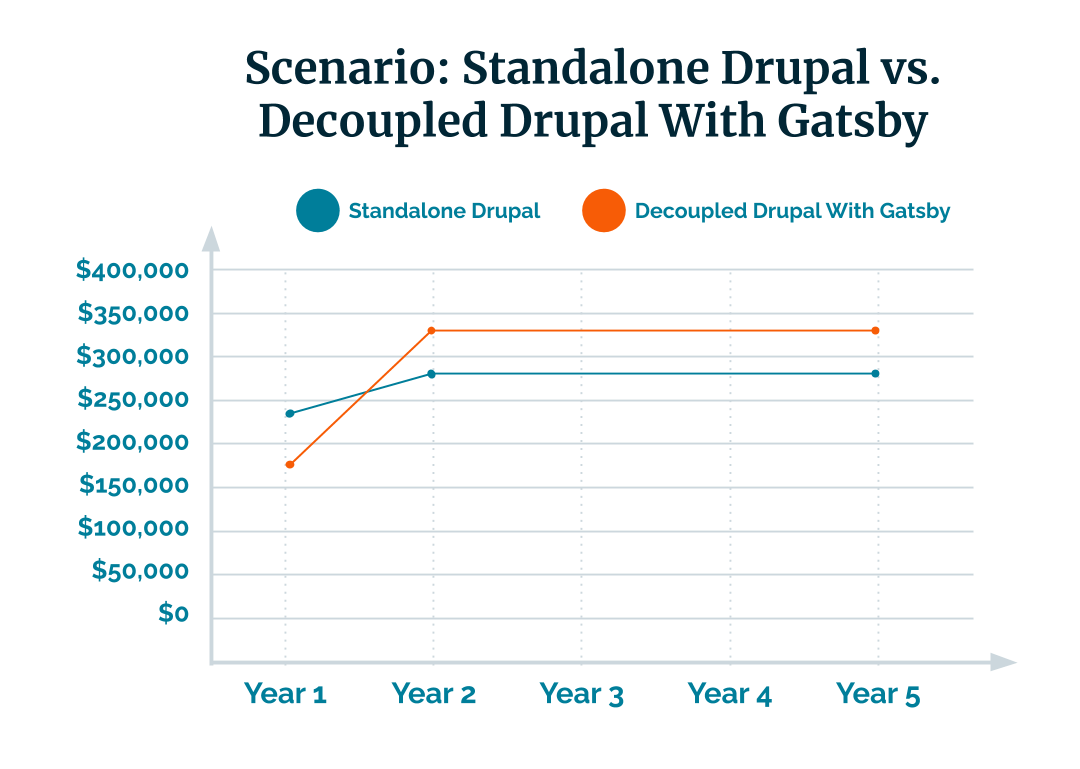 A scenario for Standalone Drupal vs. Decoupled Drupal With Gatsby

So, in this example scenario, we can draw the following conclusions:

As in our previous blog post on building your CMS business case, our example scenario is overly simplistic. In reality, detailed requirements can radically alter both the costs and benefits of any option one considers. We at Mediacurrent have performed this type of analysis for some of our clients to help them with their technology investment decisions and can do the same for you. Please contact us to learn more!