Accessibility in Drupal 7, A Case Study

In October, 2015, a team from Mediacurrent worked on an accessibility project for the Knowbility Open Air hackathon. See Part 1 for background information. We built the Grey Muzzle Organization website to be a shining example of an accessible Drupal site. Following are many of the things we did to accomplish this.

Colors for the website were chosen early on with accessibility in mind. Since one out of every twelve people suffers from some sort of colorblindness and many others have various forms of low vision, careful thought was given to the color palette. Two design concepts were provided for the client to choose from, each included their own four color palette. The colors were selected with consideration to hue, saturation and lightness. Particular attention was given to the darkest color, since it would be used for the typography and needed good contrast to ensure optimal readability. Overall contrast was achieved through the use of light vs. dark, the use of complementary colors (the opposite side on the color wheel) and included both cool and warm colors. After the colors were selected, they were tested using the color contrast check tool provided by Jonathan Snook 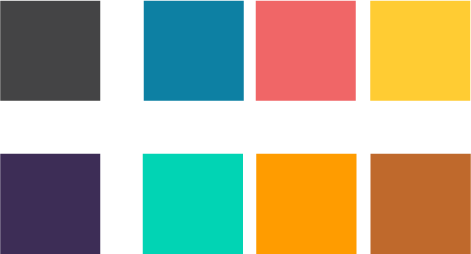 After having tested the most used Drupal base themes for accessibility earlier in the year and finding them all adequate as an accessible base with none really standing out above the others, in the interest of time, we chose to go with the one we were most familiar with as a team, the Omega theme.

The modules we chose specifically for accessibility were:

Accessible Mega Menu for the main menu of the site.  After first evaluating half a dozen menu modules for accessibility and then a failed attempt at creating a module that uses Dylan Barrell’s WAI-ARIA menu from his A11ify library, the Accessible Mega Menu module proved to be a good compromise.  This module integrates Adobe’s Accessible Mega Menu (no relation to Drupal’s Mega Menu module) into Drupal.  It didn’t have all the features of a WAI-ARIA menu but did allow a person to tab through just the parent level menu items and expand and access the child level items only when desired (as opposed to forcing keyboard-only users to tab through every single menu item).

Text Resize for text resize capabilities.  Browser zoom is better than nothing but it often adds a horizontal scroll to a page that is difficult for users with low vision.  We used Text Resize for an on-page control to allow a person to increase just the text size of the page.

Accessible Forms was a great find that helped with better accessibility in Drupal forms, which was a challenging part of the project.

Our goal was to have clean and semantic markup as much as possible...which can be a bit of a challenge with Drupal’s propensity for div-itis. Our general process was for Mario to create the markup for a particular component inside of a KSS-Node style guide and then using various methods, get Drupal to output that component using that markup.

To get Drupal to output the clean markup that Mario created for us, we used various techniques to modify the default Drupal output:

For instance, we wanted images to be wrapped in a <figure> element and if there was a caption, for it to be a sibling of the image and wrapped in <figcaption> tags. Much more semantic than the default drupal divs.

In order to accomplish this we:

We overrode views output by excluding fields from display and then adding markup with the appropriate fields to one custom text field.

Example: For our Always in My Heart list page, we excluded all fields from display, grabbed Mario’s semantic markup from the styleguide with the classes he’d assigned and then in a custom text field, added the markup and substituted in the field tokens in the appropriate places:

This gave us the output

What We Let Drupal Do and Then Modified

One of the ways in which a screen reader user navigates websites is through the HTML5 structural elements such as header, footer, navigation, aside, etc.  The screen reader allows them to bring up a list of the structural elements on a page and jump directly to the different sections.  Because of this, it’s always a good idea to mark up a list of links that would be considered navigation with the nav element.  This way, a user can quickly jump to the navigation on the site.  It’s also a good idea to label these nav elements so that the user knows what kind of navigation to expect.  For example, a main navigation, a section navigation, footer navigation, etc.  The label of the navigation will be read to the user along with the word “navigation”.  In order to get Drupal to output the menu links in this way, we need to do three things:

Menu-block-wrapper.tpl.php - used for section navs which pulled appropriate sections from the main menu.

Block--accessible-mega-menu--main-menu.tpl.php - this was the tpl.php used for the main menu of the site.  It does the same thing as the menu-block-wrapper.tpl.php file above but required a separate tpl.php file since the main menu did not use the menu_block module.

Block preprocess function - this was where we added the id to the h2 and the aria-labelledby attribute which were used to label the navigation:

Keyboard navigation was an important aspect of accessibility of the project as it affects 2 major groups of disability categories - blind and mobility impaired.  During the mockups and theming work, a logical source order (and therefore tabbing order) was established early on for accessing various pieces of the page and at various display widths.  We also made sure that the item receiving current focus was always obvious across all major browsers with a blue border. In addition, we took care of removing any rogue hidden headings and links that always seem to crop into Drupal themes.

All form controls were given some sort of accessible name, whether it be an actual visual label for form fields in the contact form, a hidden label for the search form in the header (but still available to screen readers), or through the use of aria-label and aria-labelledby.

The Accessible Forms module was a nice addition for form accessibility.  It did 3 things for us:

In addition to the improvements that Accessible Forms’ provides, we also applied a core patch. This gave us two additional benefits:

The next task was to make form errors more accessible.  When a user submits a form, and there is an error, the form gets reloaded and the list of errors sits above the form.  But a screen reader user has no way of knowing that and short of reading through the page, has no way of finding the errors.  We added role=”alert” to the div wrapping the error messages and altered the title of the page to indicate there was a problem with form submission.  When a page is loaded, the first thing that is read by the screen reader is the page title, so noting in the title that there was a problem would provide instant feedback. It was a bit of a hack but given the time constraints and limitations of Drupal in this area, it got the job done.

We also made it more visually apparent which fields were in error.  By default, this is done mainly adding a thin, colored border to the form control.  It needed to be very apparent without the use of color for people who are color blind.  We opted to make the colored border 5px in width in so it would stand out if the color was not apparent.

On the advanced search form where you can choose what content types to search, the checkboxes needed to be grouped by wrapping them in a fieldset and the label in a legend tag so that it was clear to screen reader users that they were related and what they were for.

See the blog post on building the accessibility toolbar.

Alt texts were given a great amount of attention on the site since there were so many images in different contexts - images with and without captions, images that were purely decorative, images with text embedded in them, linked images, etc. Each of these scenarios requires different alt text. See Describing Images for Improved Web Accessibility for more information.

Our final task as we were finishing up the site was to do quality assurance testing on the content as the content itself would also be judged for accessibility in the hackathon. This was done with the following in mind (not all are specifically accessibility concerns but all items can affect accessibility):

I was proud of what we created - an accessible site with an attractive design. There was definitely still room for improvement though as there were a few things that Drupal just made it really difficult to do. It will be exciting to work in Drupal 8 for the 2016 hackathon. Drupal 8 is more accessible out of the box, fixing some of the difficult issues we encountered in Drupal 7, and doing many of the things listed above by default. Time to start preparing for the 2016 hackathon!