Who remembers taking a typing class in elementary or middle school and learning about the concept of typing speed in words per minute, or WPM? There are speed demons... and then there are those who relegate themselves to the moniker of “chicken pecker,” slowly gazing over the keyboard to complete a full, written sentence.

At Mediacurrent we recently had a typing challenge to see how everyone stacked up (head over to TypingTest and take the 1 minute medium challenge if you’d like to play along)! I was surprised to take home 1st place with a speed of 108 WPM, a score I wasn’t sure was particularly blazing or not! The majority of the team fell within a range of 50 - 100 WPM, and after a bit of Googling, I discovered that the average typing speed is somewhere in the ballpark of 40 WPM. In other words, our team has some pretty fast typists! 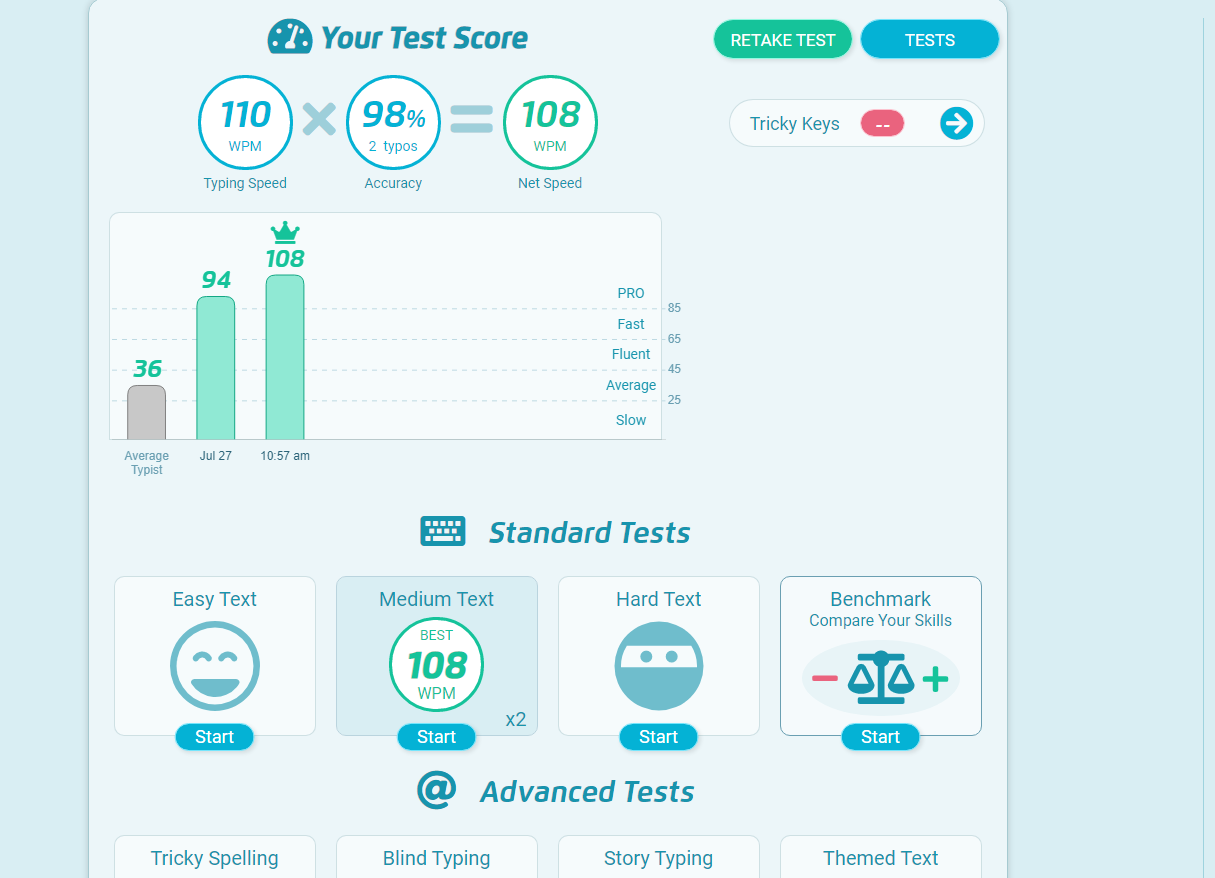 One might expect that, as a Senior Project Manager, I would naturally be adept at typing. After all, sitting in multitudes of meetings, we have to be nimble to keep up with our participants and conversations that can change course on the fly.

Don’t let your WPM fool you. I can attest that even with my speed, I’ve struggled in the past to take effective meeting notes. Project discussions often go down deep rabbit holes, especially in the initial phases when you’re trying to learn more about client project requirements. You can transcribe every word that is said and still find it difficult to extrapolate the most important information. Ask me about that typing test I took, and I’ll tell you I vaguely remember writing some sentences about Michael Phelps.

Fortunately, you don’t have to be at the Olympian level when it comes to the keyboard (although that would make for an interesting competition) to get better at meeting note taking. Below, I’ve put together a list of personal tricks that I use to capture the most relevant information between teammates and clients.

Apply These 4 Tips for Better Note Taking in Meetings

If you’re the Project Manager, get an agenda prepared and sent out in advance

The simplest things can be the hardest to make into a habit, and agendas are no exception. Even if they aren’t followed precisely as outlined, this sets the expectation among meeting members about what everyone is planning to discuss.

Ideally, an agenda is prepared a day or more before the meeting, but it is a best practice to have the agenda out at least an hour before your meeting takes place. This gives everyone time to skim over and know what to expect and prevent putting anyone on the spot for questions they may be unprepared to discuss. Plus, it’s just good internal customer service!

If you’re a participant, come with a list of ideas or questions you want answered

In a similar vein, as a participant, the more information you know ahead of time, the more you can prepare your talking points. Going in blind is a surefire way to burn through time quickly, and those one hour meetings can fly!

Interrupting is not always a bad thing

Finding opportune moments to interject is useful for both the Project Manager and participants in a meeting. As the Project Manager, you’re wanting to spot conversations that stray too far from the topic at hand, or go on longer than what you anticipated time boxing for that topic. If it feels like the conversation could warrant a separate meeting or discussion, it’s best to let everyone know so that you can stop, capture action items, and then move on to cover the remaining topics you had planned.

Similarly, if someone is using unfamiliar jargons, acronyms, or discussing concepts that don’t make sense, stop and ask them to explain it to you. Once you’ve captured the detail, it’s easy to refer to the acronym in the remainder of your meeting notes document. This also helps others who may refer to the meeting notes later but be unaware what the acronym is referring to.

As a participant, use your judgment to interrupt when context needs to be applied. For example, the topic might be oranges, but you know what the client is really asking about are tangerines. Getting on the same page helps make sure the topic isn’t confused again going forward and will help notes get taken more accurately.

Stopping the PM is also a great practice when action items are being discussed to account for anything that might have been missed or items that need to be modified slightly based on a technical discussion with subject matter experts.

If you are preparing the agenda, start with a review of previous action items if any exist, followed by bulleted topics that are relevant to the conversation at hand. You may end up jumping around these topics during the meeting, but it will be easier to contain specific notes if you already have sections created in advance for those. If you are a participant and your item is not mentioned on the agenda, but warrants a block of time for discussion, ask to get it added.

Even if you aren’t the world’s fastest typer, you can take down the most important bits in shortened versions of what you actually want to say. Chicken scratch isn’t a bad thing, if you can translate it after the fact! The trick is to review your notes after the meeting and to clean them up into what you actually want to share among team members and client stakeholders. The items that matter the most to document are:

When it comes to action items, I like to write them down as they occur in sections of the agenda. Then, after the meeting, I’ll group them all together and put them at the top when sharing meeting notes via email.

Another commonly used tactic for technical projects or those with many moving parts is to record important meetings and re-visit them after to adjust the notes you took. This is time consuming but sometimes inevitable depending on your project. If you’re using a remote meeting tool like Zoom, don’t forget to share the link to the recording once it is available and place the file somewhere that both parties can access.

If you have the time, it can also be helpful to timestamp when certain conversations or decisions happen in your meeting and add those to your meeting notes and video recording link for reference later.

What strategies do you use for effective meeting note taking? Drop us a tweet using the hashtag #NoteTaking !